Áo Dài – One of the Traditional Dress in Vietnam

Áo Dài – One of the Traditional Dress in Vietnam

If Hanbok is a traditional costume of the land of Kimchi – Korea, Kimono is the national costume of the country of rising Japan, in Vietnam, “áo dài” is a Vietnamese national garment. The áo dài is a heroic testimony of Vietnam’s transformation through each historical period so that today the ao dai is honored to appear in beauty contests and be admired by international friends. So where did the áo dài come from? In this article Vietdreamtravel would like to share you the secrets about the origin of the áo dài. 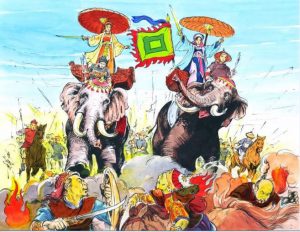 In fact, it is still unclear exactly where the origin of Vietnamese áo dài had been started, but based on the historical background of thousands of years, the researchers have come to a general conclusion confirmed that this national costume appeared in the period 38 – 42 AD. The first person to wear this outfit was the first two female generals of Vietnam – Hai Ba Trung, during the resistance war against the Han army. In order to have a long ute with bold cultural characteristics, this costume had to go through many different stages of variation.

Under the Nguyen Dynasty: 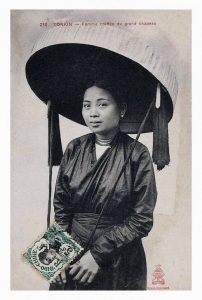 At this stage, the country was ruled by Lord Nguyen Phuc Khoat in the south, while the North was ruled by Trinh Lords. The majority of the people in this time wore “áo giao lĩnh” – a traditional cross-collared robe.

The origin of the Vietnamese coast is a primitive style of áo dài. The shirt has a wide size, split into the sides, also known as the flaps, the sleeves are long, the wrists are quite wide, the body is long to the heel. 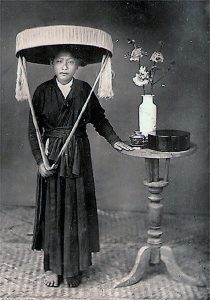 To make it easier to work as a co-worker and trader, the “áo giao lĩnh” has been redesigned into a “áo tứ thân”, in which the two previous ties are separated, the wearer can tie the two ties together, front of the abdomen. You may wonder why most of the “áo tứ thân” use dark colors?

Because the “áo tứ thân” that was commonly used in the peasantry, the laborers work hard all year round in the co-work. To minimize the visibility of dirty stains, people often use terminalia catappa leaves mix with mud to dye cloth. In general, “áo giao lĩnh” has a physique like a “áo tứ thân”, but wear only need to let 2 ties in front. 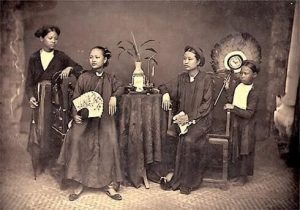 When the country was ruled by Emperor Gia Long, the appearance of the “áo dài ngũ thân” was born to create a difference between the aristocratic class and the peasantry. 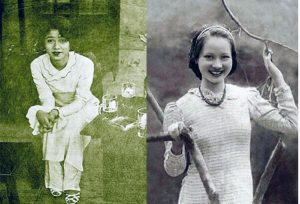 Le Mur is the first image for the appearance of contemporary Vietnamese áo dài at that time. Áo dài Le Mur was born by a creative hand from the painter Cát Tuờng, also known as Le Mur by her French name.

The dress inspired by the “áo dài ngũ thân” and by Paris fashions. It reached to the floor and fit the curves of the body by using darts and a nipped-in waist.

This is also a new combination from the “áo tứ thân” and a variation of “áo dài Le Mur” of Le Pho.

He reduced the size of the ao dai to fit the Vietnamese woman’s body, push the shoulders, lengthen the dress to touch the ground, and bring many new colors. In other words, he makes it more sexy, sophisticated and attractive.
After four years of popularization, the ‘ao dai Le Mur’ was removed all Western influences and replace them with details from the “áo tứ thân”.

From this time to the 1950s, the style of Vietnamese áo dài has become extremely popular in the tradition of the country. 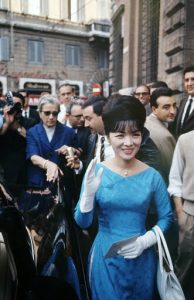 At the end of 1958, when Trần Lệ Xuân was still in the First Lady of the Republic of Vietnam, she designed an innovative new ao dai to remove the collar called boat neckline, open-necked, the local citizens called áo dài Trần Lệ Xuân or Áo Dài Mrs. Nhu. Not only strange about the pattern of the shirt but also “break the old order” with decorative patterns on the shirt: branches sprouting upside down. Some western critics argue that it is reasonable for the tropical weather of southern Vietnam. But this style of clothing made the archeologists angry at the time and condemned it as incompatible with custom.

This type of áo dài is still popular today and the neck is deep-cut to make it round, not as short as the original. 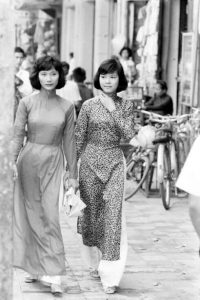 In the 1960s, there was Dung Tailor in Dakao, Saigon offering Ao Dai-style sewing with Raglan hand-stitching. This assembly solves the most difficult problem when making áo dài: wrinkles often appear on the sides of the armpits.

With Raglan, the fabric is tightly covered with the body of the person who wears from the armpits to the waistline, making the dress fit each curve of the female body, creating an additional aesthetic according to some assessments designer.

Over many periods of change from style and material to the present. The áo dài has become the national costume that bears the national cultural identity. It not only suite women but also men.
The áo dài is now a standard for weddings, for celebrating Tết and for other formal occasions. It’s the required uniform for female teachers (mostly from high school to below) and female students in common high schools in the South; there is no requirement for color or pattern for teachers while students use plain white with some small patterns like flowers for school uniform.

The áo dài emphasizes the way the dress ties feminine beauty to Vietnamese nationalism popular both among overseas Vietnamese and in Vietnam itself. “Ao dai” is one of the few Vietnamese words that appear in English-language dictionaries such as: Oxford English Dictionary, the American Heritage Dictionary, and the Random House Unabridged Dictionary.