Thien Hau pagoda has an important position in the religious life, traditional cultural activities of the Hoa people during the settlement in Saigon – Cholon. The pagoda worships Lady Thien Hau attracts many Chinese – Vietnamese people and international tourists to visit and explore.

The myth and history of the Thien Hau pagoda

According to the old folk, Lady Thien Hau practiced Confuciansm and Buddhism and had innate ability in the field of astronomy when she regularly watched the stars predict the weather, helping people, fishermen in the area.

Once, her father and two older brothers was on a boat carrying salt to trade, a big storm came up. At that time, she was weaving cloth next to her mother at home, but she was suddenly out of spirit to go to save her father and brothers. Unfortunately, she only saved two brothers, and waves sweep away her father as her mother called her and forced her to waked up. Since then, local people started worshiping her for their safety on the sea as they believed she could appear and help them when they have distress at the sea.

From the end of the XVII century, when leaving China via the East Sea to Vietnam to settle in De Ngan (later called Cho Lon), the Hoa people have turned this area into a place of residence for them until this day. In 1760, Thien Hau pagoda was built with typical Chinese architecture.

They believed that her miraculousness would help them overcome all obstacles and settle down. Therefore, this pagoda was built to express gratitude to her for helpinp them come to a new land in peaceful and safe way.

Where is the Ba Thien Hau pagoda?

The pagoda is located at 710 Nguyen Trai Street, District 5, Ho Chi Minh City. There is a Tue Thanh Assembly Hall – the gathering place of a group of the Hoa people in Guangdong China, located right next to the pagoda.

Opening hours: you can visit this pagoda every day from 8am until 16:30pm, and there is no entrance fee to go inside this pagoda

The pagoda is a perfect combination of several structures linked together based on Chinese pagoda.

The roof of the pagoda is decorated with small delicately fashioned porcelain figurines expressing themes from Chinese religion and legends. It was build in 1908. Right at the top area was placed the idols of two dragons fighting over a flaming pearl. At the middle layer was the idols of Xuanzang and his follow students and other Chinese legends. And at the bottom was place the idols of the Eight Immortals in Chinese mythology. 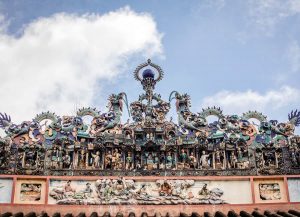 The structure on the roof of the temple

The pagoda was divided into 3 parts based on Chinese architecture: the front, the center and the back.

The bas-reliefs on one wall of the pagoda

Between these blocks, there is a space called the Thien Tinh (sky well), which helps the pagoda space to be airy, full of light and to escape the smoke of incense.

When coming thought the front hall, you will see 2 altars worship Tudigong and Menshen. The center area has a huge bronze censer made in 1886 and shipped from China with many meticulous and sophisticated sculptures. 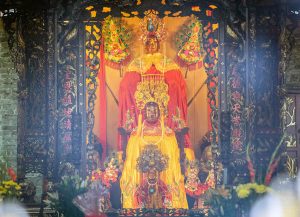 The main worshiped deity in the pagoda is Thien Hau Cung, located on the back hall. The statue of Lady Thien Hau is placed right here, in the middle which carved from a 1-meter high wooden blocks. It was originally worshiped in Bien Hoa, Dong Nai Province, before being moved here in 1836. Some other Chinese deities worshipped in this area are God of Earth and God of Wealth.

The highlight of the pagoda is the round incense hanging from above. Visitors can buy round incense, write down their wishes and hopes on paper. Then the pagoda manager will hang incense up high as if sending the prayers to the goddess.

Another interesting thing that the pagoda has over 400 antiques, including 7 statues of deities, 6 stone statues, 9 stone steles, 2 small bells, 4 bronze incense burners, 1 stone incense burner, 10 diaphragms, 23 opposite sentences … All these antiques are carefully and meticulously crafted with delicate lines.

When the holidays come up such as Lunar New Year, First Full Moon Festival or the 1st and full moon days of each month (Lunar Calendar), many people often come to Ba Thien Hau pagoda to pray for the blessings of peace, prosperity and safety. 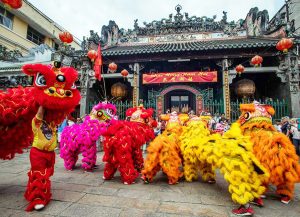 Especially, on March 23 of the lunar calendar is considered the main festival of the pagoda. On that day, the statue of Ba Thien Hau will be placed on a palanquin carried by young men and women dressed beautifully and parade around the pagoda. And many activities such as lion dance, dragon dance, arts performing … portray an extremely vibrant festival space into the bustle. 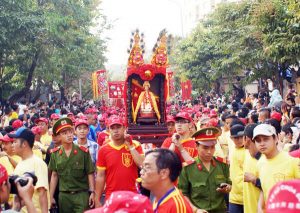 Summary of the Thien Hau pagoda

Not only is the oldest Chinese pagoda in Saigon but also considered as a spiritual house that has a great influence on the cultural life of the Hoa people.

After over 250 years of existence, the pagoda still retains its unique and impressive architectural features. And on 1993 it was recognized as a National-level Architectural Monument.

Checkout our Ho Chi Minh city tour or private tour to explore Thien Hau pagoda and other religious attractions on your Saigon trip.