One Pillar Pagoda – The thousand-year cultural symbol of Hanoi

One Pillar Pagoda – The thousand-year cultural symbol of Hanoi

The One Pillar Pagoda is a historic Buddhist temple in Hanoi, located in the central Ba Đình near the Thăng Long Citadel. It is regarded alongside the Perfume Temple, as one of Vietnam’s two most iconic temples.

The original name of the One Pillar Pagoda was Dien Huu Pagoda, which literally means “long-lasting happiness and good luck”. The pagoda is located in the western part of the city on Ong Ick Khiem St, near Ho Chi Minh’s Mausoleum. It was first built in 1049 during the reign of Emperor Ly Thai Tong, who had no children, often went to pagodas to pray to Buddha for a son. One night, he dreamed that he was granted a private audience with Buddha.
Buddha, who as seated on a lotus flower in a square-shaped lotus pond on the western side of Thang Long Citadel, gave the king a baby boy. Months later, when the queen gave birth to a male child, the Emperor ordered the construction of a pagoda supported by only one pillar to resemble the lotus seat of his dream in the honor of Buddha.

The original structure of One Pillar Pagoda is supported by wooden firmly attached to stone pillars. The structure of One Pillar Pagoda now includes pillar, lotus flower tower, and temple roof.
Pillar of the pagoda is made of 2 overlapping stone pillars to form a vertical pillar with a height of 4 meters excluding the submerged part at the foot. The diameter of the 1.2 meters wide stone pillar.
Lotus flower tower is a 3 meter square on each side, surrounded by huge bars, supported by a solid column system, underneath are large wooden beams that are directly mounted on stone pillars.
The temple roof is covered with traditional red tiles. Each tile expressed the meticulous workmanship of the craftsman. When making the roof, it is the most difficult to assemble the tile at the corner of the gutter so that there are no gaps, because this is the position adjacent to the four sides of the temple roof that often has a gap.

The temple is designed to resemble a lotus blossom, which is a Buddhist symbol of purity, since a lotus blossoms in a muddy pond. This familiar symbol of Hanoi appears in a lot of newspapers, books as well as educational programs. It has also appeared on the Vietnamese current – the coin 5,000 Đồng in the past. 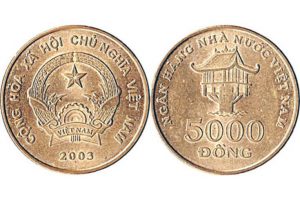 One Pillar Pagoda is on the coin 5000 Vietnamese dong.

In 1954, the French Union forces destroyed the pagoda before withdrawing from Vietnam after the First Indochina War. It was rebuilt afterward.
In 1962, One Pillar Pagoda complex in Hanoi was recognized as a National Historic Art and Architectural Relic. In 2012, One Pillar Pagoda was honored to be set a record by Asia Record Organization “The temple with the most unique architecture in Asia”.
The pagoda is open daily from 8 am to 17 pm.
The entrance is free.