Ong pagoda is one of the ancient temples in Can Tho carrying the unique culture of the Hoa people. With the delicate architectural style, the pattern bears bold Chinese culture. Exploring the unique architectural characteristics definitely leaves profound impressions in minds when traveling to Can Tho.

About the Ong pagoda

Ong pagoda is located at 32 Hai Ba Trung street, Tan An ward, Ninh Kieu district, Can Tho city. The original name of the temple is Quang Trieu Hoi Quan – the assembly hall of the Hoa people in the two palaces of Guangzhou and Zhaoqing, in the Guangdong province of China. This pagoda is a place of worship, meeting with fellow countrymen, helping each other do business. 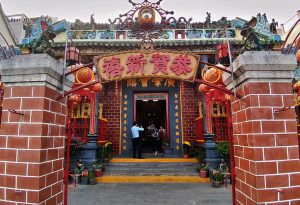 Architecture of the pagoda

Ong pagoda started construction in 1894 and was completed in 1896. Unlike some other pagodas of Hoa people, Ong Pagoda in Can Tho does not have a stele used to sign the names of the people who started the construction of the pagoda, the date of completion, but the plaques are carved wood or on the incense burner all have the full name of who supports and the year of implementation.

From the time it was built until now, the appearance of Ong pagoda has almost unchanged. The whole architecture of the pagoda was built in the shape of the Chinese character for 國 (means Nation) with closed rows of houses perpendicular to each other. 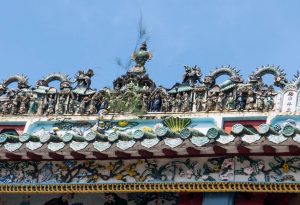 The gates and fences with stone pillars connected by iron bars. At the top of the two main pillars are decorated with unicorns, in the other columns were dragon carp. All were made of multicolored porcelain.

Stepping through the narrow yard is the first hall. In the middle of this hall is a carved screen. Above the entry doors is a signboard “Quang Trieu Hoi Quan”. 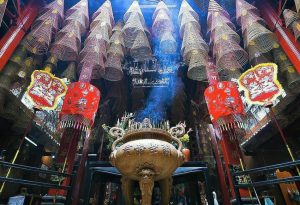 In the middle of the pagoda, there is a blank space called the “Thien tinh” (heavenly well). This is also a place for smoke escape when burning incense but it can be closed to prevent a rain and to adjust natural light.

The main hall is the most important area of the pagoda. It is here where there is a row of wooden framed altar tables, covered with glass to protect the bas-relief sculptures painted in gold.

Most of the materials to build up the pagoda were brought from Guangdong to such as wooden pillars, stone pillars, handlebars, bronze bells, incense burners … and are dated at 1896 contributed by philanthropists.

At the main hall is divided into many parts. In the middle uses worship Guan Yu, the left side is worshiping the Honor Graduate Dong Vinh and Tai Bach tinh Quan, also known as Than Tai (Caishen – the God of Money). The right is worshipping Mazu, a Chinese sea goddess. On the left – hand side is the altar of Guanyin. 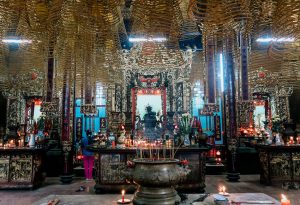 The statues in the temple are made of different materials: wood, gypsum, …

Ong pagoda has many festivals during the year, but the most typical one is the birth date of Guan Yu, June 24 (lunar calendar) and the birth date of the Mazu March 23 (lunar calendar) …
Notably, the most famous festival of Ong pagoda is the lantern festival held in every 10 years. Follow with the concept of the Chinese people, who own the lanterns, will have a lot of luck. The 6-sided of the lanterns decorate pictures of beautiful landscapes and blessings. This festival also has another purpose that donate money to charity to help build cemeteries, schools, support orphans in the city.