“Đờn Ca Tài Tử” is a typical feature in the life of the people in the South of Vietnam. It is a meaningful spiritual food to help dispel the hardship after hard working days.

Đờn Ca Tài Tử formed and developed in the late 19th century, originating from the folk music and Hue royal court music. Đờn Ca Tài Tử is a type of folk art typical of South Vietnam. This is an art form of the herd and singing, sung by the original people, young men and women in the South of rural areas after working hours.

The traditional folk song appeared more than 100 years ago, a type of performance with a band of 4 types: đàn tranh, đàn tỳ bà, đàn kìm, đàn cò, and đàn tam (called the five best), and later, it was innovated by changing from “đàn bầu” to guitar.

Those who participated in Đờn Ca Tài Tử are mostly friends and neighbors. They gathered to share elegant pleasures so they were usually not fussy about clothes. This type of music is actually chamber music that usually performs in relatively small spaces like in the family, at weddings, anniversaries, birthdays, festivals, after the harvest of crops, often performed on bright moon nights in the village.

Regarding costumes, the participants of the amateur music are mostly friends and neighbors, so they usually only wear the usual clothes when participating in the show. When they perform at temples, shrines, or on stage, they wear costumes.
In recent years, in order to meet the needs of tourists, the amateur groups gathered together into semi-professional amateur music clubs. Besides their main occupation, they serve the arts when required. 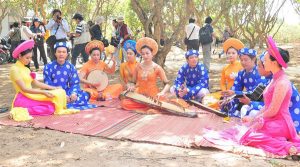 A local show in the Mekong Delta

In fact, “amateurs” don’t use art to make a living, but just for fun or spontaneity. However, this does not mean that they are not experts. In contrast, to become a true artist, they have to practice for a long time.

On 5 December 2013, Đờn Ca Tài Tử was recognized officially as the Intangible Cultural Heritage of Humanity by UNESCO.

Vietdream travel is running Mekong delta tours to explore the nature and enjoy the show of Đờn Ca Tài Tử. Contact us for more details.