Giac Lam pagoda is located on the land at 565 Lac Long Quan Street, Tan Binh District. It’s also known as Son Can or Cam Dien. This is one of the oldest temples in Ho Chi Minh City which built-in 1744 by Mr. Ly Thuy Long, a native of Minh Huong, under the reign of Lord Nguyen Phuc Khoat.

The pagoda has gone through many periods of renovation and reconstruction. And the name “Giac Lam” was given to this pagoda after the arrival of Monk Thich Lam Quang in 1772.

Giac Lam Pagoda is built on a spacious plot completely surrounded by walls. After passing through the triple gate under the words “Giac Lam Tu”, you will immediately be dominated by a large statue of the Bodhisattva Avalokiteshvara under a tall and healthy bodhi tree, a species of which Prince Siddhartha sat under while gaining enlightenment to become Gautama Buddha. 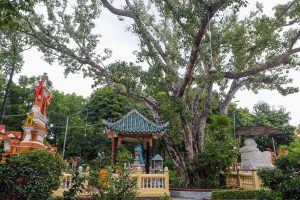 The tree present in the garden was brought to Vietnam as a great gift by a Sri Lanka Buddhist monk named in 1953. There is a Sarira Stupa, 32m high with 7 storeys. Each floor is in the shape of a hexagon which was located in the middle of the pagoda. It was built to store the samples of the relics of Gautama Buddha. Not only know as the tallest Buddhist towers but also noted landmark of the city.

The pagoda is featured by the rectangular-shaped building and divided into 3 smaller buildings: the main ceremonial hall, the dharma preaching hall, and the meal hall. In general, the building is supported by a total of 98 pillars.
The entrance to the building is adorned with dragons. The altars in the main ceremonial hall were made of bronze and precious wood same as another 113 statues in the pagoda.

In the main hall, in addition to the three-world Buddha statues including Amitabha, Shakyamuni, and Maitreya in the center, the two sides also have statues of 18-Arhat and 10 kings of the hell are placed on the altars, they are among the oldest statues of the pagoda.

On the left side of the pagoda is a series of abbots’ stupas who have presided over the temple since establishment.

As a historical site recognized by the Ministry of Cultures, Sports and Tourism, Giac Lam Pagoda annually welcomes millions of people who come to worship; immerse in the pure scenery or want to explore the unique architectural of the pagoda.