Huế is in the central region and is the former imperial capital of Vietnam which has been kept almost intact the royal architectural complex of the Nguyễn Dynasty. The region is also utterly attractive by hundreds of temples, charming beaches, several buildings built during the French rule, which showcase French architecture in its most elegant and is also a home of Central Vietnamese cuisine.

What is the best time to visit Huế?

Huế is submitted to a tropical monsoon climate divided into 4 distinct seasons: fresh spring, very hot summer, mild autumn, and windy, cold winter. The average annual temperature is 25°C. The rainy season lasts from September to November, there will be downpours during this period of the year.

The most convenient time to visit the area is from December to August. The weather is perfect for tourists to do all the outdoor activities. Visiting Huế from January to April, you will have an opportunity to see the beauty of the city and be immersed in a lively, bustling space of the festival. You will also have the opportunity to understand and to learn more about the cultural beauty of Vietnam.

However, the hottest period in Huế falls from May to August, so if you intend to explore the beaches such as Thuận An Beach, Lăng Cô Beach, etc., then come here at this time. Furthermore, you will also have an opportunity to discover fishers’ lives along the sea and in the lagoon, experience many exciting activities such as catching seafood or enjoying seafood specialties in Huế.

The Complex of Huế Monuments are historical and cultural relics advocated by the Nguyễn Dynasty to be built during the period from the beginning of the 19th century to the first half of the 20th century in the area of the ancient Huế. They can be divided into clusters of works including clusters of works outside and inside Huế Citadel. 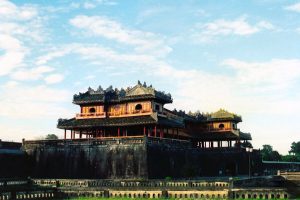 The city comprises three sections: the Royal Citadel , the Imperial Enclosure, and the Forbidden Purple City. 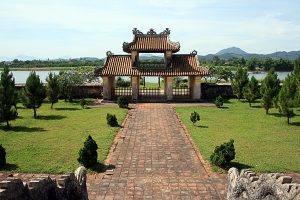 The Imperial Academy in the old capital city Huế was the first national academy built under the Nguyễn Dynasty. After the unification of Vietnam, Emperor Gia Long decided to move the capital from Hanoi to Huế. In 1803, he built a new academy located in An Ninh Thượng area, Hương Trà district, about 5 km to the west of Huế citadel, stood next to a Văn Miếu. The first academy was a small block of buildings, called Đốc Học đường. In March 1820, Emperor Minh Mạng changed its name to Quốc Tử Giám. Students were not only descendants of the royal family or mandarins but also commoners.

In 1908, during the reign of Emperor Duy Tân, the academy was moved to present location – No 1, Hai Mươi Ba Tháng Tám Street, Huế city. 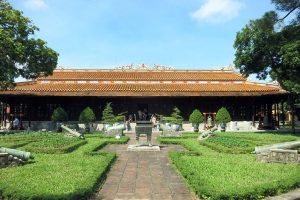 This building was the Long An Palace built in 1845 under the reign of the Emperor Thiệu Trị. Currently, the museum displays more than 300 artifacts of many available materials like gold, silver, glass, stone, jade, leather, fabris, wooden, paper….In addition, you can admire more than 100 objects of the Chăm ethnic minority that were found in XIII century. They are considered the valuable objects of the world in general and the Far East in particular.

The Huế Museum of Royal Fine Arts is a located at No. 3, Lê Trực, Huế City. 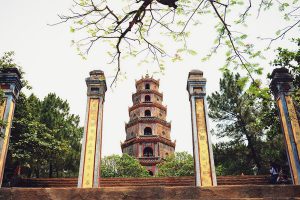 The Pagoda also known as Linh Mụ Pagoda, is one of the most beautiful and ancient architectural structures of worship in Huế. It was built in 1601 and has two main architectural works: Phước Duyên Tower and Đại Hùng Palace. Phước Duyên tower has 7 floors and is 21m high. Each of its seven stories is dedicated to a Buddha who appeared in human form. Đại Hùng Palace is the main temple, with magnificent architecture; In addition to the bronze Buddha statue in the palace, there are countless statues and a bronze statue cast in 1677; a wooden fresco painted with gilded vermilion, donated by Lord Nguyễn Phúc Chu in 1714.

The pagoda is situated on Hà Khê Hill on the left bank of the Perfume River, about 5 km to the west, in Hương Long Commune, Huế City. 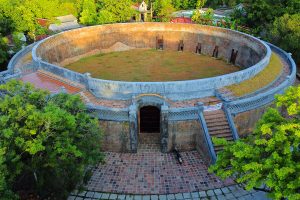 Hổ Quyền is built under the Nguyễn Dynasty used to organize death battles between elephants and tigers to entertain the kings and high-ranking officials. Hổ Quyền was built in 1830, located near Long Thọ hill, 4km from the citadel. The last match took place in 1904 under the reign of Emperor Thành Thái. Hổ Quyền is an open-air arena shaped like a scarf. The diameter of the basin is 44m, the circumference of the outer wall is 140m. Around the wall, there are 5 tiger cages and a large archway for elephants to enter and fight.

There are seven royal tombs in Huế that are the final resting places of the Nguyễn Emperors. The construction of each tomb was very meticulous. And they are built with almost similar architectural designs. 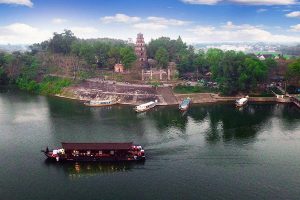 This 80 km-long flows through many forests of aromatic plants before crossing the capital city of Hue, bringing with it a pure and fresh aroma. A trip visit to Huế would not be complete without a boat excursion on this gentle river. The boats take visitors to every corner of the city: under Dã Viên, Phú Xuân, Đông Ba market and Trường Tiền Bridges, to the tomb of Minh Mạng, Hòn Chén Shrine, Thiên Mụ Pagoda, and finally to Thuận An Beach. Especially, when the night comes, the surface of the river glistens under the moonlight, and the songs of the boat rowers can be heard breaking the silence. 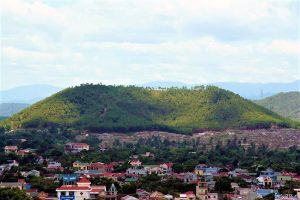 Ngu Binh Mountain is also known as Ngu Mountain or Hon Mo or Bang mountain with 103 meters height and located 3 km from Hue. Combine with Hương River, Ngự Bình Mountain is the gift of the Nature and have become the symbol of the city.

On the nice day, from the Ngự Bình Mountain, tourist can contemplate the spectacular scenery of the whole city, ancient pagodas, Hương River, white sand-bank of Thuận An beach along with the blue of sea creates the beautiful picture that make unforgettable impression.

Mineral Stream of Mỹ An 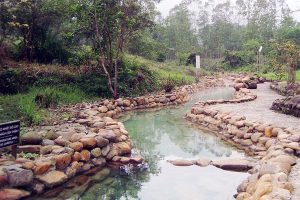 Mỹ An is located in Phu Duong Commune, Phu Vang District, 7km east of Hue, on the way to Thuan An Beach.
In June 1979, geological and meteorological expedition No79 discovered this natural stream. After multiple scientific studies and experiments, the project “Studying medical qualities of the mineral stream in Mỹ An” came to the conclusion that the mineral water in Mỹ An includes every micro-element necessary for the human body. The water of this stream can be used to successfully treat several skin and venereal diseases, rheumatism, digestion, mental, respiratory, and other chronic diseases that have been attract many people come to self treatment. 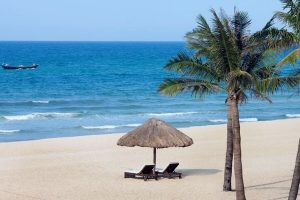 Thuận An beach is located right next to Thuận An estuary. It take about 20 minutes by taxi, half an hour by motorbike or 45 minutes by bicycle from the city center to the beach. Along with Lăng Cô beach, Tam Giang lagoon, Thuận An beach is also a masterpiece of nature in Huế attracting tourists from all over the world. This is where the Hương River flows down the direction of Tam Giang Lagoon and then empties into the East Sea, merging with the vast ocean. Therefore, Thuận An beach has its own beauty between the light of the gentle river and the vast sea. ​Coming here, tourists not only have the opportunity to enjoy the scenery, have fun bathing but also have the opportunity to explore the fishing village, experience the fisherman’s life at night.. 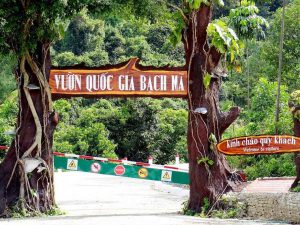 Bạch Mã National Park is approximately 50km south of Huế with a cool temperature and break-taking natural landscapes such as Hải Vọng Đài – the highest peak (1,450m) where people can have a panoramic view of immense sea and surrounding scenery, Đỗ Quyên Water Fall – a 300m high and 20 – 30m wide, five lakes – a system of large lakes created by the block of black granite…The Bạch Mã National park is also a home of more than 931 species of animals of which 83 wildlife species, 333-odd species of birds known to inhabit Việt Nam. More than 1,406 species of plants have also been identified. The best time to visit Bạch Mã is from February to September. 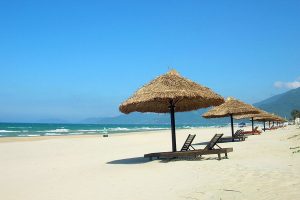 Lăng Cô beach is about 10km long, located along with the National Highway 1A, near Hải Vân pass. Lăng Cô Beach is a natural scenic spot of Thừa Thiên Huế province.

The beach has long been famous for white sand and clean, shallow water which are suitable for the type of beach tourism. Especially, it is an ideal place for luxury resorts along the beach for decades. 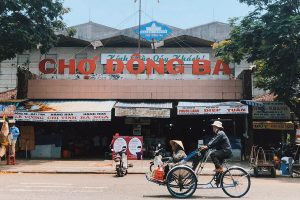 Connecting from Gia Hội bridge to Truong Tien bridge, it occupies a large building along the northern bank of Perfume River, Đông Ba Market is the biggest commercial center of Thua Thien – Hue province and the adjacent regions.

Similar to most of Vietnamese markets, Đông Ba is divided into many different sections, depending on the types of products. The 3rd floor is the main trading area for fabrics and clothes. Down to the 2nd and 1st floors is the convergence of art items, delicately depicted from famous traditional craft villages of Hue. And the 1st floor is the place specializing in famous Hue specialties.

Phủ Cam Cathedral is one of the big, famous and long-standing churches in Huế. The construction started in early 1963 and completed in 2000. It was designed by the architect Ngô Viết Thụ.

Inside of the Cathedral was built following classical Roman Catholic tradition. There is a cross made of steel and concrete on a round pillar. The building has two wings extending to the right and left. In front of the building are two statues: Saint Paulo is on the left and Saint Phero is on the right.

Warmest Greetings To All from Viet Dream Travel! We offer Vietnam tours (daily and package tours), visa services, and transfer services throughout the country. Let us have a chance to show you not only Huế but also other parts of the country to the fullest. If you have any questions about Vietnam tourism, do not hesitate to contact us at: